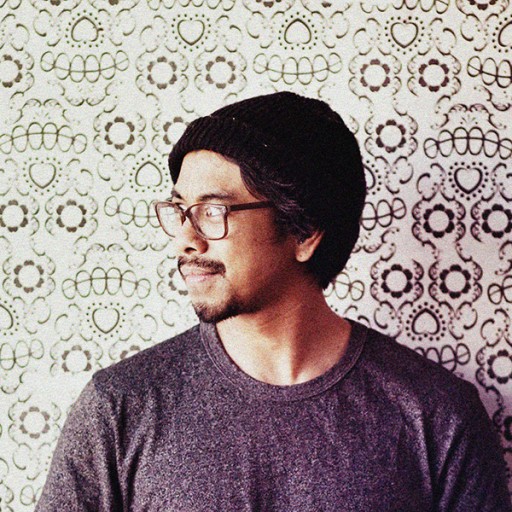 Chris Alfaro is Free the Robots. The genre-defying artist pulls together heavy doses of traditional jazz, psych, electronic and hip-hop, with progressive melodies and devastating drums…

Last month we visited Nosaj Thing, Mono/Poly and Free The Robots hosted by ‘BUZZ ON YOUR LIPS’ in Brussels. We interviewed the last two of this line-up prior to their performance, here’s the first of the series: Mr. Chris Alfaro aka Free the Robots.

Hi Chris, thanks for doing this interview. You make music and own a restaurant, can you tell us something about how that all started?

It actually all started from music and messing around. I was DJing, playing in bands, throwing parties, going out night after night around LA and OC, all while working at an art gallery during the day. I was lucky enough to find a group of friends who were into the same things I was into. In our local community of Orange County, that can be tough. It’s pretty much [laughs] a place where absolutely nothing interesting goes on. We had no choice but to stay creative for our own sanity. Our whole group of friends had specialties in different disciplines. We were all artist of some sort with tons of ideas. We had a chef friend, and a guy who was managing restaurants, this and that. So we’re just like ‘okay, let’s do something we can all do together, and turn what we love into a living’. This became The Crosby.

I, myself, no. I’m really bad at that, I handle the music, work on flyers, and focus on getting people through the doors.

How do you keep up with both of these?

It’s definitely a major collision of worlds. On one end I’m a total space cadet making music and there is nothing social or logic about it. It’s my world; my own creative space and i don’t have to worry about pleasing anyone The restaurant, on the other hand is a completely different story. We have a team to work with, employees to manage, customers to keep happy, and we have to always be on our toes to keep growing. As long as I am actively building both worlds, they tend to help each other on the grand scale. Music is something that I will always do on my own. The Crosby is a place we built for our friends and the community; a place where we essentially would want to go to every night. Everyone contributes, everyone has good ideas and the people there are all my best friends. With balance, it’s a great situation.

What are your favorite dishes?

Everything they make me! We have a rotating chef specials menu, and this keeps them working on new ideas. I like to taste those new ideas while i walk through the kitchen.

What city in the world has the best restaurant / food?

Definitely Saigon, (Vietnam). Even their street food is amazing. I just try as much as a can. I’m always down to get exotic in parts of the world as well. I literally have eaten scorpion in China, and horse sashimi in Japan. It’s a part of the game. Next time in Saigon, I’ll be on a mission to eat cobra heart [laughs]. They do that. It’s crazy, it’s like a beating cobra heart and they put in a shot of Vodka and you have to drink it and eat the snake. That’s on my bucket list for sure.

What got you into doing music?

I don’t really come from much of a musical family other than DJing, my brother was DJing and got me into DJing. That’s essentially the thing that sparked my interest in learning how to play music. I was really into scratching and things like that, the act of digging for records and wanting to do something with it eventually got me really listening to jazz music and psych music and all sorts of different music. That’s when I knew I needed to take this to the next level, not just focus on scratching but just pick up some other instruments.

Can you describe some elements of the LA culture that inspired you personal?

My experience making my weekly treks to LA around the late 90s/early 2000′s taught me a lot… and it really started from going to different club nights out there. That’s where a lot of LA culture and the communities began. down low raves, warehouse parties, bar residencies, after parties; this is where a lot of like minded people congregated and collaborated. These are the places you would meet different Musicians, artists, designers, dancers, jewelers, chefs, people with random crazy ideas who made them work.

'Personally, I've always been DIY (Do It Yourself) with things. I grew up in hip hop, punk, and all sorts of stuff, and everything was all about doing it yourself. My approach to my records, designs, to the restaurant come from that same free energy'

What can you tell us about the name Free the Robots, how did that came up?

The time I started to experiment with music as a solo artist was the perfect time. Truth be told, I was getting bored with music, until MySpace happened. When I first saw that, and its potential, i felt liberated. It was like: ‘Here is a kid in his room who doesn’t have to follow how it’s always been, signed to a label or whatever’. It just clicked, I took that whole DIY thing and brought it to the internet, and things just changed. All of a sudden, I was no longer a minority in this. There were a bunch of bed room music nerds just like me, who I started meeting and sharing tunes with. Its like the community of real artists was coming together on their own. That liberating feeling brought out the name “Free the Robots.” For one It just sounded dope to me; for two, I felt like a new movement was happening. I put out my first record, which was the Free The Robots EP, and it was something no label would pick up because dynamically, it didn’t make sense. every song is completely different, but that’s exactly what I wanted to do. I wanted to create something completely free from thinking about impressing anybody.

If you have to describe your music in three words, what would they be?

Freedom. I don’t want to say weird, but I guess being that free can be weird… In a good way. Ahh, dirty, and raw.

Who are your role models in music from back in the days?

Back to the whole Orange County thing, when you’re a kid living in that area, you grab on to any bit of culture you’re lucky enough to get exposed to. I grew up watching movies like Beat Street and Kids, while listening to Wu-Tang. I was kinda of amazed; drawn to city life, even though i knew nothing about it. It inspired me, and i was into a mix of everything from hiphop, punk.. b-boying, skateboarding.

What genre would you consider your music to be?

I can’t really say what genre. Its really a combination of everything, with a hip hop approach. I like psychedelic music, beats, hiphop, jazz to even pop and r&b. Essentially when you break it down, it’s electronic music, which is a much broader spectrum these days.

Do you see yourself as a role model nowadays?

I never really thought about it like that, but its definitely gratifying to hear that I have played a role in inspiring some.

What ‘new’ artists draw your attention that we should def check out?

Co.Fee. He’s always been one of my favorites, a bit under the radar right now. Jonwayne, off course, he’s just a genius in my book. This band called Feeding People whom I’ve worked with, the lead singer Jessie Jones is actually on the new Free The Robots record. The Soulection label, I really dig their sound as a whole. Leaving Records on the left field tip, for my left field moods… Kutmah and his new Izwid projects… The Burger Records label. There’s so much music right now, it’s insane.

What are your future plans and do you got anything else to say?

After I working with Feeding People I started collaborating with Jessie, the lead singer, and we want to do a whole project together. I also have some unfinished Psych / Ska type recordings with Ikey Owens that we’ve been waiting to finish. He was actually on one of the tracks of Control Alt Delete. I’m working on the new Free the Robots record as well. It’s planned for a release this year.

The store is located in a modern waterside structure facing the city centre across the meuse river. It’s spacious, with floor-to-ceiling windows that allow in floods of daylight. The store interior is clean and basic but features a range of furnishings and props that are loosely inspired by an actual playground which allows different configurations. …

Los Bangeles was present for the launch of NOISE Magazine, the new hot skate mag, made in Rotterdam. NOISE comes in print and that's what makes it special. From the name to the way it's made, we tell you everything about this new gem in the specialized …

It’s almost March again, so Amsterdam is prepping itself for another banging edition of 5 Days Off. Five days filled up to the max with the freshest experimental music, workshops, talkshows, exhibitions and even a record …