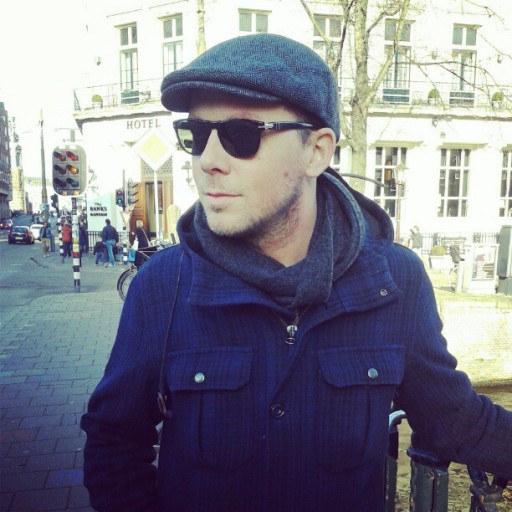 Head of Communications at 5 Days Off.

It’s almost March again, so Amsterdam is prepping itself for another banging edition of 5 Days Off. Five days filled up to the max with the freshest experimental music, workshops, talkshows, exhibitions and even a record fair.

This will be the first edition of 5 Days Off without any local funding, so Los Bangeles helped them out with the outsourcing of their creative campaign. Rotterdam’s local heroes Iwan Smit and Bruce Tsai combined forces and delivered some awesome artwork for 5 Days Off, which are exhibited during the festival. We wanted to know something more about the festival and the people behind the scenes, go have a look for yourself.

Tell us a little something about yourself…

My name is Bas van den Broeke and I’m active as Head of Communications over at 5 Days Off since September 2011. I’m responsible for the big campaign, communications with the press and media partners and promotion for the whole festival. Long story short: my main job is to make 5 Days Off stand out in the crowd and to fill the venues up to the max. Next to this I’m also coordinating the side-program of 5 Days Off. This year, next to all the musical violence, we’re also organizing a record fair, some talk shows, various workshops, a photo exhibition and a radio show. I’m doing all this together with Daan Spoek (Big Boss) and Marloe Boon (Co-worker Communications).

How did 5 Days off start and what’s the idea behind it?

This year it’s the thirteenth time we’re organizing 5 Days Off. The festival started out in 2001, as the little brother of 10 Days Off in Gent, Belgium. Mojo Concerts, the Melkweg and 5voor12 brought the concept to Holland, later on Paradiso and the Balie joined as partners.

5 Days Off is a progressive music festival that brings the best dj’s and producers from all around the globe to Amsterdam. For a solid five days visitors can check out parties in the Melkweg, Paradiso and the Balie. It’s a festival for everyone that has a little bit of electronic music flowing through their veins. (Almost) all music genres are present at the festival, and we’re always on the lookout for fresh and upcoming talents. Pretty much all big dj’s from Holland already had a gig here at 5 Days Off, except DJ Tiesto. We just can’t afford that guy.

'5 Days Off is a progressive music festival that brings the best DJ's and producers from all around the globe to Amsterdam.'

Is there a comparison with 10 Days off? Do you have contact about how you both run things like the line-ups?

As said before, 5 Days Off started out as a collaboration with 10 Days Off, but nowadays we’re somewhat more independent. Of course, we still have close contact and we visit each other’s festival to see how they’re getting things done. Especially the recent days with the crisis and all, 10 Days Off are also cut off on their local funds just like 5 Days Off. This 2013 edition is the first one edition we pulled off without any funds by the government.

Who’s your main inspiration when it comes to music?

Daan and me are both widely interested in all kinds of music. We keep an close eye on what hits the internet and try to listen as much music as possible. Blogs, Soundcloud, Twitter and Spotify are all great sources for inspiring new music. Daan is a big fan of that groovy techno sound, I’m more an experimental music type of guy. For instance, Conforce is doing a great job on their latest releases, and for my own upcoming party Antenna I’ve even booked Stellar OM Source!

Who are your favorite artists at the moment?

The new James Blake ‘Retrograde’ is pretty awesome and recently I’m listening to Objekt, Lando Kal and Marcellus Pittmann a lot. Last week I’ve discovered Unknown Mortal Orchestra and that sound is completely different from what I usually listen. Thom Yorke’s new project ‘Atom For Peace’ is on repeat too.

How do you guys decide on the lineup?

We choose our line-up in close consult with our programming commission. This commission consists of people from the Melkweg (Camiel), Paradiso (Eva, Ben and Kees), Mojo (Hidde, Maurice and David) and 5 Days Off (Daan and me). We create a big longlist at first and check out what’s attainable. After this we have to check out who’s available and what are they going to cost us. We choose the headliners first, then we try to fill in the lineup per evening. The programming already starts in the summer.

What’s the craziest requirement you’ve ever received from an act?

I’ve recently read that the guys of HOMEWORK always have an indoor plant and cucumber on their wishlist. Don’t ask me why. Someone else explicitly told the programmers nobody was allowed to offer him drugs during his show.

Name a couple of your favorite sites, next to Los Bangeles of course…

I have a standard ‘to-do’ list with bookmarks in my browser containing websites I visit daily. Next to Facebook and Twitter I try to check XLR8R, 3voor12, Pitchfork, DJBroadcast and Factmag every day.

What does a day in the life of 5 Days off ‘Bas, Daan and Marlou’ look like?

We have our own office in the Melkweg, our day starts off somewhere between nine and ten ‘o clock. Usually Marloe is the first one at the office, Daan and I are both not a big fan of early mornings so we tend to start around ten ‘o clock. Our day is filled with replying and sending emails, collecting the latest news for our social media, consulting with the designers over at Grrr to check on our campaign and meeting with the people over at the Melkweg and Paradiso. Sometimes we forget to lunch, but there’s a great bakery around the corner for some sandwiches. Music is key in our office, we take turns playing our favourite music and when necessary, we throw in some old gabber tracks to refresh our energy!

How do you keep it fresh? After all, you’ve been doing this for 12 years now.

Of course it’s difficult to keep on innovating since dance is getting bigger each day. 5 Days Off was the first overnight festival in Amsterdam, it’s amazing to see how much it has grown since then. There’s no need to go on holidays, just get yourself some tickets for different parties and you’ll be having some major fun, guaranteed. We also try to aim higher every next edition, our music programmers are doing a hell of job getting the freshest artists each year.

How do you respond to negative feedback or reactions like ‘back then it was better’?

It’s funny to see how many people react positive regarding 5 Days Off. People just like the festival, so we’ve got a reputation to take care of. We can’t afford to slow down, we have to keep innovating in fields of artwork, communications and programming. Of course you’ll find some occasional haters on Twitter, but without hate there’s no love eventually.

In your opinion, what were some of the most memorable moments of 5 Days Off?

Last year we had Noisa Invites in the Melkweg, that show was just plain crazy. Completely sold out and the crowd was going buckwild. I was checking out the big mosh pit from the balcony, unbelieveable. Another good one was the show by Autechre back in 2005. All the lights were turned off and the beats that came out of the soundsystem literally shook my pants!

Of all the acts 5 Days Off has had, which one was the best thus far?

That’s hard to say. I’ve got loads of respect for Jeff Mills and had a great time seeing him perform a straight six-hour set in the Melkweg last year. It’s was almost touching to see him up close like that, in his white shirt. Devoted like crazy, pulling banger after banger and still finding a perfect balance between deep and hard.

In The Netherlands 5 Days off is a household name. Any plans to go international?

That’s a good idea, 5 Days Off is a genuine Amsterdam festival but I’m sure it would work in any big city around the world. I currently don’t think we have enough manpower and a wallet that’s big enough to pull this off yet. But I can imagine if there’s some international interest, I’m sure Paradiso and the Melkweg would like to help out for future possibilities.

How has 5 Days off been handling the fact that the government is not subsidising the festival this year?

You can image we were pretty bummed out about the government funds cut off. It’s a lot tougher this year, even our campaign got influenced a little bit this way. The grungy black and white feeling is more or less a crisis kind of look. No happy colours, but a monochrome artwork consisting of photo’s we took out of our 5 Days Off archive. I’m glad we managed to pull off a great upcoming edition this year, we put up a supplementary program with partners who love to work together with us: Red Light Radio, OT301, SSBA Salon and CJP. It even made it easier to make some decisions, but the possibilities are not as big as they used to be and that’s just too bad.

If money was no issue, what would an all star lineup look like at 5 Days off?

What don’t we know, but what would you like us to know about 5 Days off?

It’s important to know that the core of 5 Days Off only exists of a mere three people, Daan Spoek, Marloe Boon and me. Of course we’re being supported by the marketing- and production department of Paradiso and the Melkweg, without those guys we wouldn’t be anywhere. Just remember that we’re working our asses off to deliver our visitors a awesome experience over at 5 Days Off!

A skate pool is way more than a collection of nicely designed ups and downs. It’s a place for the community to socialize, shred, or just hang …

Los Bangeles was present for the launch of NOISE Magazine, the new hot skate mag, made in Rotterdam. NOISE comes in print and that's what makes it special. From the name to the way it's made, we tell you everything about this new gem in the specialized …

OPPERCLAES. offers young and upcoming creatives a platform to show work to peers and the established art and design world. What started out as a traditional gallery quickly grew to a unique concept that has been translated to collaborations with art fairs, live events at festivals and instore art …