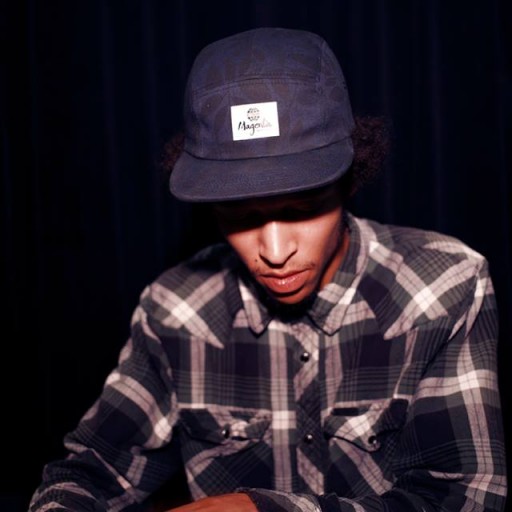 The Hague’s FilosofischeStilte, aka Luuk Graham started making music because of a love of rap, but soon outgrew singing over his own beats and stuck to…

We were hanging out with Luuk, who introduced himself as Luuk Graham, better known under his musical alias FilosofischeStilte. He describes his music as a cross-over between hiphop and electronic music, and calls it ‘future cloud bass’ or ‘cloudrap’. We don’t care that much about genres though, Luuk’s music sounds enchanting and distinctively electronic, with little hints of 8-bit Commodore-like sounds.

How would you describe a perfect day in your life?

Waking up slowly and heading down for some nice breakfast. After that I’ll jump behind my gear and create a beat, a crazy awesome beat. Then I’ll go meet up with some friends and we’ll end up at a houseparty, something like that.

What was your first encounter with electronic music?

MJ Cole’s Introduction. I still remember that one, it felt like a moment of clarity when I first heard that track. I just broke up with my first girlfriend back then, and it just calmed me down.

Luuk has been busy in the beat game for a solid four years already. Things sped up quickly from the start –  after six months of producing, he got asked by Lowriders to do a release. ‘Maybe it all was a bit too soon, but its always a good thing when people appreciate your music. I was only 17 then, now I’m 21’.
The best set he did (so far) was as a support-act for Mount Kimbie, also a dream come true because he’s a huge fan of the English duo. ‘The show was at Trouw, and everything went perfectly. Obviously, the presence of Mount Kimbie played a part, it just had to be flawless’.

When we ask Luuk about his process in producing, he tells us that he discovered his own development in that manner. He used to produce 5 to 6 beats a day, most of which just didn’t sound good enough. Now it takes a lot more time before he’s satisfied with a beat, no quick beats will make it to an EP, but there are exceptions of course. So you could say that Luuk is always raising the bar in his own productions. ‘Well yeah, of course, sometimes everything just works out. The beats match the blips seamlessly and then suddenly your track just feels right. It’s a great thing when something like that happens and I wish it could be like that every day, but unfortunately it doesn’t work that way’.

'Next to a digital album, I’m also putting it out on vinyl. That way it lasts a lot longer, mp3 files are a lot easier to forget, vinyl is here to stay.'

How did your releases on Lowriders Collective happen, can you tell us something about that?

That was one of those perfect days. There was a graffiti wall at Parkpop in Den Haag, I used to spray a lot back in the days, and we were doing a demo right then. That day I did my last piece, and it turned out great. With my heads in the clouds, I turned up at my girlfriend’s place, and I saw that Hans from Lowriders just sent me a message via Soundcloud regarding the release. It was just was insane, I couldn’t be happier. It was the 6th of June 2011, I still remember that.

What’s your view on the beat scene here in Holland, when you compare it with other countries?

The scene in Holland is growing like crazy, new producers just pop out of the ground and that’s a good thing to see. It isn’t the same old group of people who do beats anymore, people come and go and that’s perfect for the variety in music. A big shout-out to my boy Torus, this dude just makes cool and beautiful music. Just like Subp Yao by the way, an awesome beat-maker as well!

We always wondered why Luuk sees himself as FilosofischeStilte. ‘I think is has something to do with the fact that I’m always questioning the world around me. I was used to asking questions about things that didn’t really have an answer, things like ‘How can you know that you’re seeing the exact same thing as the person next to you? Doesn’t everybody have this filter through which they perceive the world in their entire own way?’ My mother always called me the philosopher of our family, it also happened to be my nickname back in school.

His producing stops him from the deeper thinking, and puts the focus on his music. He always has random thoughts flying through his head, and they help give direction to his music. Making music is a form of meditation. Philosophical silence is the most optimal moment in which you’re creating music, and so you are in your own philosophical silence. Think of it this way; music sets the tone, but the tone also sets the music. ‘My music makes you think, but it doesn’t demand too much of you’. You could approach it as a meditative state of mind, if you’re open to it of course.

School is a necessary evil for Luuk, something that doesn’t provide him with any inspiration. Atthe moment he’s studying Industrial Design, but he would rather be illustrating and drawing. He has lived in Den Haag his whole life, a busy town that has found its perfect spot among the Netherlands’ other major cities. According to Luuk, PIP Den Haag is the best spot for parties.

Do you have any role models you look up to, and how do they influence your own music?

My first real role model was Ghost Mutt, who is also a part of Lowriders, When I heard his music I was like ‘Wow, I also want to do this stuff!’. I’ve been listening a lot of grime the last few months, and love to do this kind of music, pure bangers. The combination of my easy stuff mixed up with bangers adds some extra contrast in my set, otherwise everything just sounds the same.

At first I started out listentening hip-hop, and I’ve never stopped listening to it. I also used to do grime, I kind of jumped from genre to genre. Next to UK Garage I always was a big fan of drum & bass, especially the stuff Ali G used in his show [haha]. I was into dubstep for a while, but it felt too easy, it didn’t have enough depth in my opinion. I’ll still play some old stuff by Skream and Digital Mystikz, but they already had a different kind of sound back then.

You also need to check out DJ Smokey, this guy is doing a really solid job with his productions. His instrumentals are a perfect fit for rappers! The second mixtape he did for Yung Simmie was insane, it had a lot of Smokey’s beats, but his last mixtape was just terrible.
I also listened a lot to Clams Casino initially, but at the end I didn’t like all his stuff. His last tape was kind of okay, but it doesn’t come close to his first tape.

What’s your personal masterpiece? Can you even say such a thing about your own music?

I still like some of the stuff I made, you always need to keep listening to your own stuff. You need to evaluate your tracks, otherwise there will be no further progress in your music.

I recently did a track with Janneke Nijhuis, she’s playing in The Deaf, alongside Spike from Di-Rect. Janneke is one of the easiest persons to work with!

Tell us something about your upcoming album, we’re really curious what you got in store for us!

Well, it’s a long process and it’s just hard to make choices. Next to a digital album, I’m also putting it out on vinyl. That way it lasts a lot longer, mp3 files are a lot easier to forget, vinyl is here to stay. I’ve really put a lot of effort into this one, it became such an easy and fine album, it just has to be pressed on wax. I’m also really curious about people’s opinion on these new, calmer sounds.

You use a lot of videogame-like sounds, are you a gamer?

I used to be, yeah. I tried to play some new games this year but it didn’t really work. I got GTA though, but only played it like 10 times, and didn’t finish the storyline by far. I never feel like playing vidogames anymore, except Skate. I used to grind the streets myself, so Skate will always be my game on the PS3.

Who should we interview next?

Kubus is the artist name of Bart van de Werken, known from production for Opgezwolle, Jawat and many more Dutch rappers. …

A not so Bad Start for young Parisian producer Vorace. Being raised on rock music, he mastered the almighty piano and converted into digital music-making. After practising with beats for over 5 years, Vorace just released his first EP called 'Bad Start' over at the Belgium homies from Tangram …

After taking Rotterdam by storm, the very talented gentlemen from BadBadNotGood made their way to Amsterdam, and we followed! The show at the MC Theater was everything we’ve come to expect from the guys - vibrant, energetic and full of little twists and …