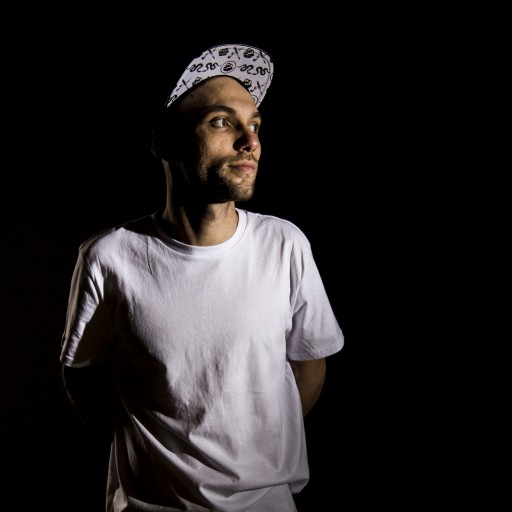 The name Subp Yao (pronounced as ‘sup yo’) regularly pops up in the local and global bass scene. He recently released his new EP ‘City of Dreams’ (09/17/2014) on Doggtown Records and considering all his other projects, we can definitely call him a busy cat.

Finally!!! 'City Of Dreams' on Doggtown is out! Thanks a million dOOp and Cata.Pirata for blessing the ep with… http://t.co/QsKZAE8n6T

A while ago we hung out with Subp Yao after a show with dOOp. The Dutch electronic music producer and dj is a true visionary, as he talks passionately about his work, the power of internet and the local scene.

It’s nice that when I’m together with dOOp, we can go for so much diversity. I used to make hip-hop, until I reached the point that I was a little bit done with it and looking for other things. And dOOp, well his background is more boom bap hip-hop (Het Verzet), but it’s nice that he broadens his musical horizon too. Our mutual love is grime, but when making music it goes in many directions: as long there’s bass in it.

Your music styles are evolving, do you think the audience is going along with it?

If you’re doing a DJ-set within one genre, people only accept that when you’re really good at it. Like Spinn and Rashad for example. But for me it’s more exciting to play and produce various styles. UK Garage, half-tempo drum n bass, trap, you name it.

I think that the people want it that way as well. Diversity goes with the bass-scene, and I believe people like Gaslamp Killer have paved the way for that. Jameszoo is good at it too!

So you started with hip-hop. Can you tell us something about how it went from there?

I used to listen to a lot of underground stuff, that Anticon sound. In 2008 I went to Dour Festival (Belgium) and heard Digital Mystikz playing. I was so amazed by them, playing hours of that deep bass-drenched dubstep. I always was aware, but that was the moment I realized that there was so much more than hip-hop. At that time, the LA beat scene was emerging as well.

'In The Netherlands, the bass-scene could be a lot more established. Bigger stages at events, a weekly hour on commercial radio, you name it. It’s a small step from hiphop. You actually can blend in instrumental beats easily.'

Would you put all that diversity in a new album?

Yeah, I would go in any direction. But for now I’m working on an EP for Doggtown, the collective I’m in, and an album is for the far future.

Actually I believe that the hype around an EP is based on only a single track. Many producers grow fast by releasing one track, every single month. And that works well. People want to be fed quickly and that’s because of the internet.

It has two sides to it; as a producer, once you drop a track, it’s already out of sight by the end of the day. It keeps you sharp, though. On the other hand as a listener, you can collect a lot of music in a short amount of time.

You live in Heerlen, a city far from the Randstad (a region in The Netherlands, considered by many as the center of economical, political and recreational activity). But even though your career would gain a boost if you live in Amsterdam for example, you still prefer to live in Heerlen. Why is that?

Yeah, you can live in the middle of the scene and check out things every night of the week, but actually with internet that’s possible too. Next to that, I have gigs almost every week, so I get to travel a lot. In case I would move, then it would be to Los Angeles, to be close to the source, I reckon.
In Heerlen I have a big studio and all that I need, I don’t feel restricted in any way. There’s nothing exciting to do out there, but I’m cool, the tranquility is good for my focus.

Since when did you get more bookings?

My EP release on Saturate got me more in the picture, and at the moment Doggtown is boosting as well. It’s cool to be in a collective because every member brings his own value, qualities and network. We got to know eachother during gigs and at a moment I received a call from Daniel (Guerilla Speakerz) about working together. And I was like: “Let’s do this.”

Our first work was the Doggtown compilation earlier this year and we had lots of support from the beginning. Then we released Beaudamian and Guerilla Speakers. By the end of the Summer I will release mine and Boeboe is in line too. The power of a collective lies in open communication and inspiration. You really can lift each other up on the way and reach goals, individually and as a team.

It all sounds busy, doesn’t it?

It’s indeed a pretty full schedule, but I’m looking forward to all of it. Live gigs, DJ gigs, my own releases, remixes for Zeke Beats, Bird Peterson on Last Gang Records Canada, and for FilosofischeStilte on Lowriders Recordings.
Next to that I do studio-work, mixing, mastering and sound design. But I’d rather make beats all day.

There are many things going on around the globe, with very active local bass-scene and many people attending weekly events. What is your point of view on the scene in The Netherlands?

You can’t find it here like that, yet. Even though the scene is booming, with many listeners and music-lovers, but it’s too bad that people don’t go to the party’s that much.
It’s about media-attention as well. There isn’t really a dedicated blog, radio station or show that plays beats and bass. In The Netherlands, the bass-scene could be a lot more established. Bigger stages at events, a weekly hour on commercial radio, you name it. It’s a small step from hiphop. You actually can blend in instrumental beats easily.

Compare it to Belgium, they have Lefto on national radio with a weekly show. He has a great selection, supporting local artists as well and it works, with a great output and a huge reach.

But we’re on a positive way, though. I have to give a shout out to Roosmarijn Reijmer and Thomas Delsing on 3FM (national radio), they support this progressive music. Don’t forget about the online streaming platforms 22tracks and Shourai, they’re doing really well. And I feel that there’s a lot of support amongst the local producers and DJ’s.

So you find it important to have a curator like Lefto, Benji B, Gilles Peterson?

I wish there was someone in The Netherlands who could fill in that role. Venz and Jiggy Djé used to do that for hiphop in their show ‘Wat Anders’. There are so many ridiculously good producers here, we need a good platform to spread besides our own soundcloud and bandcamp pages.

And of course it’s good when productions are picked up in Los Angeles, the source of most of our inspiration. It felt amazing to hear D-Styles begin his podcast with a track of mine.

With who of your favorite artists would you like to do a collaboration with?

I don’t know, really. I love to work with people I can personally level with. It’s not because of the name or popularity.

Is that the driving force, that you’d rather work within your own personal surroundings?

Exactly, it’s a kind of chemistry and the result could be much better. But those surroundings grow as well, you get to know more and more people. As a DJ I like to play unreleased music, just to let the people know about so many undiscovered dope things from just around the corner.

Who should we interview next?

Sevdaliza, a great artist and she deserves more recognition here. And Mucky, that insane producer, you can ask him too.

When we met up with FilosofischeStite a while ago he told us about this friend of his; Torus. He blew our heads off at the Boiler Room x Rwina Records takeover at Rotterdam Beats last year; a set filled with 90s Eurotrance and bubbling mixed up seamlessly with beats, bass and hiphop. Get retro with …

Meet Touchy Subject aka Stephen Raynes. A creative caterpillar who explores the boundaries of cross media creation. Whether it's design, animation, creative concepting or producing beats. Touchy is all …

Rotterdam Beats was in town a few weeks ago and one of their headliners was Austrian composer, producer and keyboard mastermind Dorian Concept. He's easily one of our favorite musicians around, so when he passed through town we grabbed the opportunity to get to know him a bit better. Read along and get familiar with …