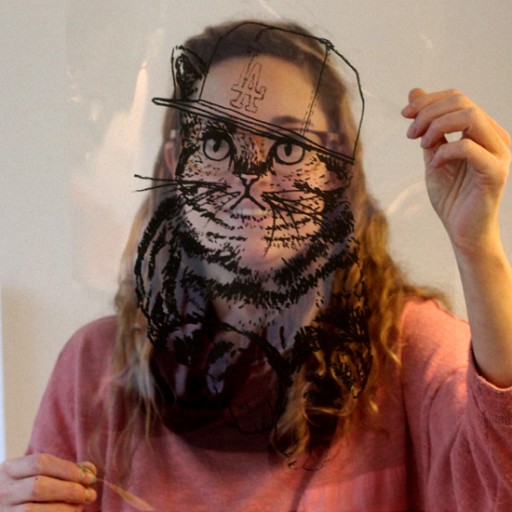 Saskia Haex is BURO/ATELIER a studio for illustration, graphic design & screenprinting based in Rotterdam, The Netherlands.

Cats, bicycles and awesome illustrating; a small intro for Saskia Haex. A good friend for many years already, her creative mindset, genuine kindness and child-like sketchy drawing style got us together for an interview and collaboration!

Allright, lets start off with a brief introduction. Tell us something about who you are and what you do.

Okay, the name is Saskia Haex, pronounced Haaks. I’m an illustrator, graphic designer and mostly I do stuff I like.

How did your love for screenprinting and making illustrations began?

As a child I was always pretty busy making little drawings and just making random stuff. Through the rise of street-art I saw people reproducing their own work and spread these works all over the streets. Because of this I did some research on techniques to do this myself and so I started to experiment with screenprinting. I’m still a huge fan of screenprinting because of the numerous possibillities it brings.

Which people are your rolemodels?

You’ve been around for a while right now. How do you keep catching inspiration for your work?

When you’re working, what kind of music do you often listen to?

I don’t really have specific music I listen to while working. Usually I’ll put on 22Tracks, preferably the ‘Beats’, ‘Originals’ or just the frontpage. Next to that I have some mixtapes by The Flexican or Yellow Claw and otherwise I’ll tune in on the ‘Luisterpaal‘ at 3voor12.

Tell us what a perfect day in the life of Saskia Haex would look like.

That would be a day filled up with new brilliant ideas, some drawing, not too much emailing, some good food and ripping the streets on bikes with some homies.

When you’re working you’ll probably have hundreds of choices in materials to work with. What are you personal favourites?

My all-time favourite tools are wide brushes with ink or some thinned acrylic paint to write or draw with.

What would you like to do in collaboraton with Los Bangeles?

I would really really like to set up a nice party on the beach and decorate it and stuff, but we ended up with a nice tee and a print about cats from LA. Maybe something for the future?

When working, do you prefer to work it in your own studio or on location?

I prefer working in my own studio over working on location. In my studio I can work on different projects simultaneously which I later on eventually can build with Marianne Lock.

'I would really really like to set up a nice party on the beach and decorate it and stuff, but we ended up with a nice tee and a print about cats from LA'.

We now know that you’re all in to screenprinting and drawing and stuff, but do you have any secret talents nobody knows about?

Right now I’m doing a lot of different stuff and I like it a lot, I like the alternation of it . In the morning I’ll do some logos or objects made of textile and in the afternoon I’m organising events and connecting with sponsors. I’m also very fond of riding my bicycle, but I’m not killing it to be honest…

What’s a thing you really can’t do?

Sitting still and doing nothing. And working all alone in a studio sounds like hell to me too.

If you weren’t doing what you’re doing right now, then what?

Last question, if suddenly your house is on fire, what things you just can’t leave behind?

Katleen, my cat. For sure. Cats make the world go round!

Equipped with just his pen and paper, Gino is making the easy look good. His work is known for its analogue approach, no-nonsense clarity and bold …

The ‘This Thing of Ours’ capsule collection consists of a custom made card deck and a limited shirt, based on Martin Scorsese’s cult classic Goodfellas. The mysterious illustrator behind the pack is a calm and humble guy, and he goes by the name of …

In the beginning of 2013, Bier en Brood made this huge mural at the Hofbogen in downtown Rotterdam. The insanely high detailed characters and the grimmy and almost apocalyptic vibe of their piece just blew us …