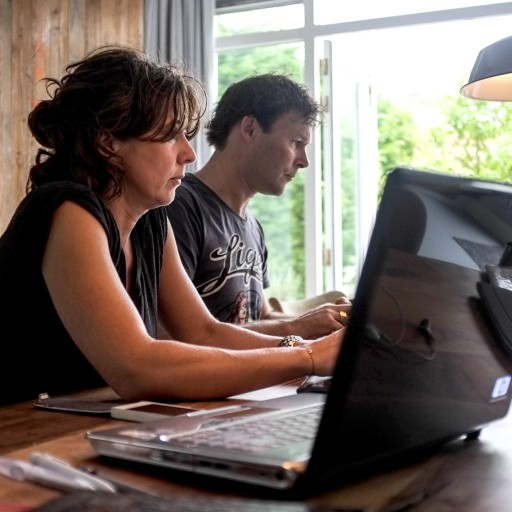 ‘Interacting art’ is what best describes newcomer t-shirt designers Julius and Angela Leijger from ‘This is LIGER’. Inspired by a bold boy’s dream and born on an Italian holiday, this brand decided to create interactive designs by cooperating with illustrators, painters, character designers and all-round artists. Fun fact; this brand does not do collections but ‘waves’.

Tell us a little more about this particular dream of yours, Julius.

Back when I was a 14/15-year old kid, I always wanted to own the nicest t-shirts. I didn’t care about the prize for I would save up until I could buy them. A few years later, in retail school, I wrote a business plan on t-shirts. My teachers told me: “We think you should get to work right away.” In my opinion I wasn’t done learning so I got a job at a screen print shop where I started collecting different prints. In my breaks, I would print the ones I collected and soon enough they got sold. I was delighted: even more so when, later that night at Rotown in Rotterdam, I saw a girl wearing my printed shirt. The feeling that you can create something that people like and enjoy is what brought me the most joy. Perhaps that’s in my genes, since I was brought up in family of hairdressers. I was supposed to follow in their footsteps but soon enough I noticed that that wasn’t for me. No, nothing else but creating t-shirts and beautiful designs for me. With Angela working as a tv-producer and me as a retail account manager we harvested as much knowledge as we could get, which serves us daily!

I kept talking and talking about my dreams to everyone who would listen until my wife and now business partner told me: “Stop talking about it and start doing Juul! Let’s get to work together and I know for sure we’ll pull it off!”. The same day, on our Sicilian holiday, we drafted a plan. Everything had to fall into place and be done the right way. It had to be unique, something that hadn’t been done before, and still deliver quality. We thought everything through from the numbered amount of shirt to the artists and designers who should get the platform they deserve. Most of all, we should get satisfaction and joy from the creation of our art.

How did you decide on collaborating with artists and how do your decide on who will be in the ‘Wave’?

We had already formed our concept; always six new top artists, 36 retailers and an amount of 360 shirt per designer. Also we found that there was a likeness in the t-shirt world; the same prints, the same tags in whatever brand we saw. Everyone copied one another and that was exactly what we wanted to change. There is so much talent in Holland and the rest of the world when it comes to visual artists and we wanted to transport their art to a different environment than on walls, in magazines or on album covers. Now their art is appreciated on a different platform where their names and work are validated in full view.

When choosing artists, Angela, our friend Bert Dijkstra and I discuss which designers we would like to collaborate with. Nowadays many designers send in their work so our choices expanded immensely. Eventually we want six different styles and we choose designers that we think match with This is LIGER.

Not only do you pay attention to design, but also to fabrics and materials, please elaborate!

A beautiful design deserves a beautiful canvas and our retailers are more high end so we searched for high quality production facilities. There are only few who produce beautiful cottons and who can print the designs without getting a thick layer of plastic on your chest. Finally we found a facility to our liking, and that amounted to a high quality shirt that, for example, can be ironed. We also tweaked the unique numbers and the LIGER patch on the sleeve before we achieved the quality we now deliver.

Do you consider yourself an alternative platform for artists, like Vince Ray, Errol Buwalda and so on?

Yes, you could say that, but we never really think about that. We just really enjoy creating collaborations with top designers and transporting them to a different ‘environment’ or platform as you say. For us this is bringing their art to a wider audience and surrounding them with other (international) brands.

What’s the story behind the concept ‘wave’, which you’ve been using for your collections?

We only produce t-shirts, nothing else. We wanted to do this in a unique way, just as our t-shirts are unique. We felt that a different naming was appropriate and on the beach in Sicily it wasn’t hard to come up with the term ‘Wave’.  It’s great to see that the retailers and consumers of our brand started using this word as if it were the most logical thing on earth. Especially when they ask: “When will there be a next wave?”

Why 360 pieces per artist and why 6 artists per wave?

Designers: It’s better to create six top pieces which we back up 100%, than to create 10 of which 4 don’t sell.

Retailers: We don’t want to be sold on every street corner and with 36 retailers, we span out across the Netherlands very well.

Pieces: We want to stay exclusive but to produce in a factory you need a certain volume. Also, the 360 pieces represent the 360 degrees way we look at and approach the market.

Please, describe the typical wearer of ‘This is LIGER’.

The LIGER man is a man with balls, if I may speak bluntly. He has more eye for design than the average man and usually has a higher education. The wearer is between 15 and 50 years old. He’s a man who wants something just a little different than what’s popular at that time. You either like This is LIGER or not.

The thing about our concept is that people actually enjoy the story behind the t-shirt and want to share it like a fan! Barry Hay is one of those men and wears our brand on stage a lot, but also young “BN-ers” (famous Dutchmen).

If you could time travel into the future to see where you’ll be in 15 years, would you? If so, what do you think you’ll find?

We’re currently working on expanding our concept to several European countries. So, we’ll be adding 360 t-shirts per designer, per country. Every shirt will get it’s own land code so that it’ll still be a collectors item. Our goal is to put This is LIGER on the global map in the next 5 years!

Thijs van Buuren's main weapons of choice are his needles and thread in all colors imaginable. As Tegendraads he's mastering the art of embroidery, taking over the world one stitch at a time. We had a good talk at his home in downtown Rotterdam, big up for …

The store is located in a modern waterside structure facing the city centre across the meuse river. It’s spacious, with floor-to-ceiling windows that allow in floods of daylight. The store interior is clean and basic but features a range of furnishings and props that are loosely inspired by an actual playground which allows different configurations. …

Together with Fourteen we interviewed co-owner Johan Stork of Common Kin, a store specialized in upscale menswear with a strong international appeal and customer base. We talked about inspiration, aspirations and the road to …