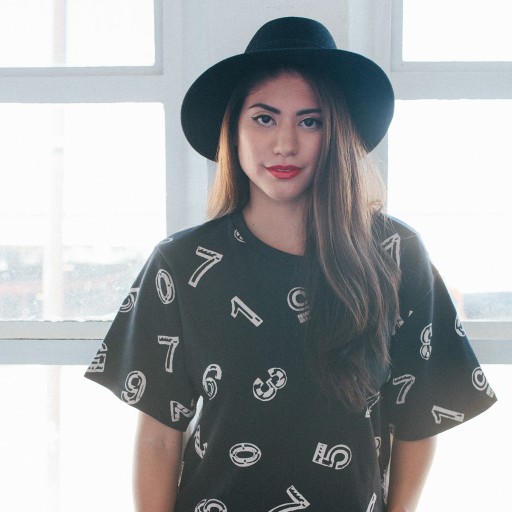 We completely fell in love with Astronautica after she hooked up with Christian Long on a photoshoot and mixtape for Los Bangeles. She’s a member of the HW&W collective and recently released her ‘Replay Last Night’ EP on Alpha Pup Records. A beat-driven beauty, give it up for Astronautica!

Tell us something about yourself, who are you and what do you do?

Hey hey my name is Edrina I’m 23-years-old born and raised in Southern California, and I am a producer/DJ.

At what age did your interest in music begin? When did you decide to be a producer?

I was always interested in music, ever since I was a kid. For Christmas when I was 6 years old, I received this little acoustic guitar from my grandparents and I would pretend I was Gwen Stefani, I had this dream of becoming a rockstar.

What’s the story behind your name?

Other than dreaming of becoming a rockstar, I also wanted to be an astronaut. Since that dream fizzled eventually, I decided I could kind of keep it alive by using the name in a figurative way.

What kind of gear do you use for making music?

I produce mainly on my iMac and use an Akai MPK49, my guitar, a RODE microphone, AIAIAI headphones, M-Audio monitors. For live sets I use my MacBook and APC40.

'Other than dreaming of becoming a rockstar, I also wanted to be an astronaut. Since that dream fizzled eventually, I decided I could kind of keep it alive by using the name in a figurative way.'

How did you end up at Alpha Pup and HW&W, can you tell us something about being part of such creative communities?

Thanks to the internet, Daddy Kev found me on Soundcloud and sent me an e-mail asking me to play Low End Theory. It was so surreal at the time because I was such a fan of the whole scene. After my first set there, Kev asked me if I was interested in making an album, and of course I was. I signed with Alpha Pup about a month later. Being apart of Alpha Pup is like having a bunch of older siblings that you look up to. Coming into it I was so inspired and influenced by a lot of artists that were affiliated with the label and Low End.

HW&W happened a few months later, I met Francis, the art director, through a mutual friend and we all just hit it off. Everyone on the label is pretty close, we have BBQs and hang out whenever artists from out of town come to LA.

Both Alpha Pup and HW&W have it’s own unique sense of family and I think it’s inspiring being surrounded by people who are your friends and who have similar interests and goals as you do.

Do your parents support your (music) career choices?

They do! I know some people who’s parents aren’t as supportive and how much of a burden it is on them artistically. I’m fortunate enough that my parents have always been a fan of whatever I get myself into, I don’t know what I would do with out that.

What are your (musical) highlights so far? (like DJing alongside Big Driis aka Idris Elba)

The biggest highlight so far for me is just the fact that I grew up going to concerts, festivals and shows. If someone would have told me back then that I would one day be up on stage too, I’m not too sure I would believe them. I recently played at the Glasshouse in Pomona which was a venue I went to all the time growing up, I saw so many of my favorite artists on that stage, so playing up there was not only nostalgic but very very cool to me.

Who are your musical heroes?

Too many to name, so to consolidate: Aaliyah and Ta-ku.

Netflix favorites? (Most recent movie or series you’ve checked that somehow made some impact on you?)

OMG House of Cards is crazy, I watched both seasons in a week. Frank and Claire are this power couple who basically have their eyes set on a goal and do anything and everything to make sure it happens. I don’t think I’d ever go through as extreme/scandalous measures as they do, but their drive to make it happen is empowering.

Do men (or women) ever hit on you when you’re performing? If so, can you share some of the more weird pick-up lines you’ve heard?

Oh man haha, so this one time at Low End Theory someone in the crowd screamed “I wanna suck your tit!” during a slow part of my set, it was really awkward. I feel like most of the pick up lines are on twitter or tumblr, I get the marriage requests, asked out on dates, nothing too too crazy thankfully. This one guy offered to buy me a whole pizza and two bottles of wine though, that was pretty cool, I love pizza… and wine.

Tell us about three songs that somehow changed your life.

These artists and songs played a major role in my life as I grew up because they contributed to the foundation of my musical tastes today.

Aaliyah was one of the first female artists that I was truly inspired by. The music world is a male dominated society, and as a little girl watching MTV, BET, and VH1, the majority of the music I was watching and listening to were not women. When I would watch Aaliyah videos, it was inspiring to me because here she was, a needle in the hay, doing what she loved, and doing it well. I knew that that was also something I wanted to do with my life.

Nirvana was a band I loved because of how real and gritty they were. I remember in 8th grade we had to do biographies, all the kids in my class were writing about Martin Luther King Jr., Princess Diana, and all the other typical people kids my age looked up to… I did a biography on Kurt Cobain, probably not the best person to write about at that age, but I didn’t care, I was interested in his life and wanted to read all about him. My teacher told a friend that he was “worried about me,” (haha). I think I turned out fine.

A Tribe Called Quest, that is the group I have listened to through just about every stage of my life. From being a kid and listening to it from the passenger seat, to getting my license and playing them first thing in my car, they are timeless to me. Their rhymes are so smart and witty, and the beats are just so refreshing.

What kind of food do you like most, and what are your favorite places to eat?

I love all food, no discrimination. Right now I’ve been eating  a lot of falafel from this place called Sacas by my house. It’s seriously the best falafel I’ve ever had. But my all time favorite restaurant is this place called Spaghetti Eddies, no matter how many nice restaurants I’ll go to, it’ll always hold a special place in my heart. I’ve celebrated just about every birthday dinner there with my family.

What are your favorite spots in Los Angeles?

Do you have some hidden talents no one knows about?

Hmm I like gardening but the only plants I can keep alive are succulents.

If you weren’t into music this much, what kind of job would you be working right now?

I got my degree in Communications cause I’ve always liked writing and journalism, so I’d probably have a dope music blog featuring all of the artists and people I’ve met in the industry.

Since you’re Astronautica, ever thought of space traveling?

If you could do a back-to-back set with anyone in the world, dead or alive, who would it be?

What can we expect in the (near) future?

The day after his great show at BIRD Rotterdam. We hooked up on this rainy Sunday morning, just before Flako took his train back home. We sat down at a local coffee store and warmed up with a few cups of …

Ba Ba, Lé Lé and Di Di. You still with us? These are the tracks from Olvo's recently released EP, infusing some African and Hawaiian vibes within his electronic beat spectrum. Olvo is a …

After the release of Ausarian Comforts we were immediately hooked on the first track Ancestral Ascension. This made us very curious about the man (and the legend) behind this literal mystery with his beat …