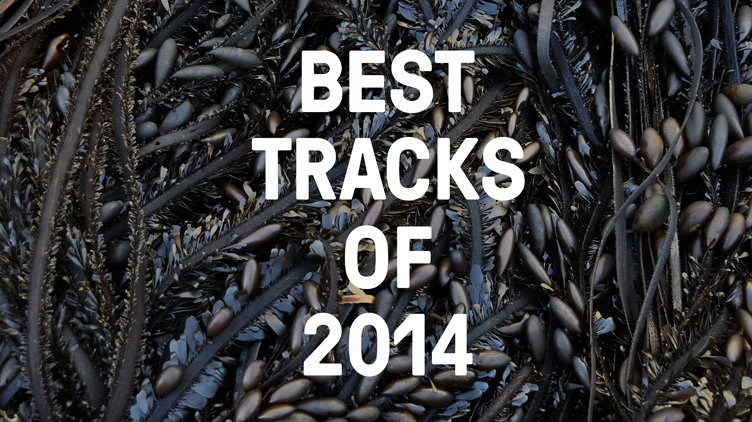 A new year is coming up tomorrow, so we couldn’t think of a better day to remember your ears all about 2014’s best tunes. Rules were broken, punches were thrown and blood was shed; picking the cherries was a fun but tough job. We’ve listened to a huge amount of music and it’s pretty hard to kick an awesome track from your list. So if we missed out on your personal favorite, drop a link in the comments so we can check it out.

‘So raw it hurts. Vince Staples just ripping up those bare beats, maxed out hiphop’.

‘The track ‘Brockwild’ shows you Darkhouse Family’s dark-bass underground quality. And while you expect everything will remain underground, a wonderful uplifting sunburst (1:54) into the beat-cave turns this track one of the finest productions of the year’.

‘Kutmah hooked us up with this gem; a dancefloor-banger with some spacy Jamaican vocals. Deep basses and an uncontrollable melody, ready to shake up your internal organs’.

‘A multi layered track with lovely spacy sounds coming from a peaceful planet in the universe of Rwina Records; the label that brought us so much good in the past 5 years. Never walked on the Veluwe before? Make this your New Year’s goal and pump this track from your headphones while walking there’.

‘The homie Simon SMTNHG couldn’t be more on point with his remix of ILOVEMAKONNEN’s ‘I Don’t Sell Molly’. Call it ghetto-jazz, don’t sleep on this one’.

‘A delicious raw Dilla beat with some fresh energy and diversity through his strong lyrical skills. Hip hop at its best, the countdown to his album on the 20th of January has begun’.

‘The ultimate Sunday afternoon tune. So incredibly easy going that you’re having a hard time deciding whether you’re awake or still sleeping. Sunny side up, positive vibes all around!’

This 90’s funky sound represents Detroit in all its layers. While listening to this track you will immediately feel the need to get your roller skates out of the closet and to roll to the nearest disco floor. The gospel choir provides the necessary goosebumps, easily the best funk release of the year’.

Released on the Darker Than Wax compilation ’10K’, this track is composed by the Aotearoa-native virtuoso. The song grabs you with it’s heartwarming flow, clearly transforming from one part into another. With his out of the box-thinking, Samuel Truth let’s us know that he is a true musical visionair. Emerald doesn’t conform to the standards, and that is just what we like’.

‘Lots of music floats around in this artist’s orbit. Recently he has released his beautiful EP ‘Suture’, after years of inspiration. It is a new welcome to the wonderful world of TK, for both longtime followers as well as new ears. His signature sound has a wider spectrum than most people know of. Every now and then a true gem follows it’s own path, barely noticed by the bigger audience. Phobos 5 is one fine example. The dynamics, rhythms, chord-progressions, are outstanding. The result is a complex, yet smooth arrangement by this one-man-orchestra’.

‘Every now and then a collaboration comes along that makes us think ‘Why didn’t this happen sooner?’, and RTJ is just that kind of project. El Producto and Killer Mike proved to be a perfect fit for each other when they dropped their debut LP a year ago, and the follow-up finds the pair more focused than ever. It’s hard to pick a single track from one of the most critically acclaimed albums of the year, but in the end we had to settle for the superbly titled ‘Close Your Eyes (And Count To Fuck)’. El-P’s menacing loop of Zack’s voice only serves as a little teaser for what will surely go down as the best featured verse of the year, and the sheer fact that the former Rage Against The Machine front man can steal the show from RTJ makes this one a must-listen’.

‘Bronsolini and Party Supplies have a proven track record when it comes to head-nodding beats and out-of-left-field lyrics, so when the former began teasing us with Instagram posts of the video shoot for ‘Easy Rider’, we naturally got very excited. The 1974 Mazhar Ve Fuat sample serves as a perfect backdrop for this modern rendition of the cult counterculture movie, and though some would argue Bronson ain’t no Peter Fonda, the track rightfully finds its way to our best of year list as we await his “Mr. Wonderful” LP early next year.’

‘While Run The Jewels might have been a case of ‘Yeah, that makes sense’, Madlib teaming up with Indiana native Freddie Gibbs was one of the genuine surprises in hip-hop’s recent history. After dropping a few singles, the pair finally blessed us with a full-length LP this year, and we weren’t disappointed. Built upon one of the finest soul samples we’ve heard in a long time, ‘Deeper’ summarizes the entirety of ‘Piñata’ in just over 3 minutes – merciless and uncompromising, yet painfully personal and self-reflective. We can only hope this isn’t the last time these two team up!’