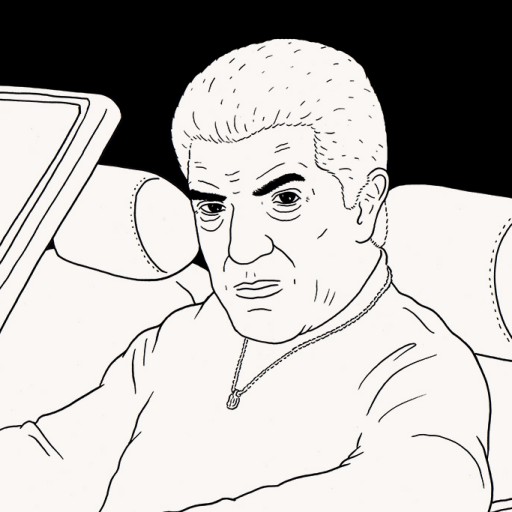 STIKSTOK is a pseudonymous Dutch contemporary artist. His current work subject consists mainly of a wide range of mobster movie inspired illustrated pieces. The all black…

This coming Thursday (18 Dec 2014) is the day WOEI sneaker store launches the ‘This Thing of Ours’ capsule collection. It consists of a custom made card deck and a limited shirt, based on Martin Scorsese’s cult classic Goodfellas. The mysterious illustrator behind the pack is a calm and humble guy, and he goes by the name of STIKSTOK.

Who are you and what do you do?

I’m STIKSTOK and I do fine art.

Why aren’t you that known yet?

Good question. I’m a low-key kind of guy. You know me now though.

Can you explain your artist name?

It’s a nickname from when I was a kid. And it’s still here.

Word on the streets is that you’ve made something in collaboration with WOEI, can you tell us more?

That’s correct. We’ve teamed up to do a small capsule collection based on Martin Scorsese’s cult classic Goodfellas; we did a deck of cards and a shirt. The mixtape that goes with it is done by Jeff Solo.

The WOEI-family supported me right from the start. We share a mutual love for the ‘wiseguy’ genre and we have the same vision and mindset when it comes to a good product. They have the illest shop in Rotterdam, the city where I’m originally from. So it feels good to do my first collaboration with these guys.

And the idea to do something inspired by Goodfellas?

To do a deck of cards was actually Jarmo’s idea, shoutout to him! He’s the consigliere / street-boss at WOEI. Like I said, we both share the love for the mobster genre and the Goodfellas theme felt like the best way to go.

When is it ready for the world?

There’s an in-store launch on the 18th of December at WOEI. The first 100 customers get the ‘This Thing of Ours’ mixtape for free. I will also put some personal work up for sale that evening.

Your style of drawing is resolute and clean, has it always been like that?

Yes, pretty much. Probably because I have a graphic design background. I look at images in a certain way, I can see the rendered image of how I want it to look before I start.

So I bring the image down to its essence; the basic lines and colors.

That’s why I prefer to work with black ink on paper. In the future, I will experiment with other materials, but for now this is my signature style.

Can you tell us something about other projects of yours?

I’ve got an ongoing illustrated column on Frank151.com, which always features mob actor Frank Vincent. It’s a nice column because I can basically do whatever I want. I’m working on some other fun projects at the moment but unfortunately I can’t give you any details on that yet.

'I’m a low-key kind of guy. You know me now though'

I was always into skateboarding, since I was a kid. I’m sure it played a big role: it forces you to be creative with your surroundings. It’s about getting better, seeing limitations as a challenge, falling down and getting up again.

When I was in school, a specific illustration style drew my attention. It was Parra: the simplicity and strength of his work and the ongoing success is very inspiring.

I like Japanese illustrators such as Namio Harukawa. His way of drawing and his themes are somewhat surrealistic. Just out of the box. A while ago I visited Japan and I was determined to find some of his work. My search took me through all the local bookshops. Eventually I found “Garden of Domina”, a story about femdom. I’m sure you can find it on the internet, but looking for it in Japan meant a lot more.
If you experience the culture, you can understand the art much better. It tells the story of a society where every member deals with, for example, hierarchy and respect, taboos and expression. The same counts for Toshio Saeki. His work looks like traditional drawings, but his themes are beyond borders. Pretty interesting stuff.

For the work I’m doing now, movies are obviously a very big inspiration, especially for the theme.

And of course music is an influential element, it puts you in a certain mood. My taste goes from old Brazilian funk to contemporary grime. While working, it’s music that takes me along through the vibe, I think it’s the most important source of inspiration for me.

You mentioned your surroundings were very important, can you tell us more about that?

First of all I work in my home studio, it’s very relaxing. Outside the studio I like to observe and capture things I see around me. I always had a certain fascination for people, I wonder which stories lie behind a person.

When did you decide to do more with illustration?

I have been living in different countries and I was a more-on-my-own type of kid. In drawing I found something I could focus on, even if it only was to kill time. You don’t need that much besides some material and your own imagination.

Later on, I worked as a freelance art -director and designer for 10 years, and although it’s good money, most projects are not really satisfying. So the last year I’ve been spending more time illustrating subjects that I like.

Imagine yourself as a moviestar. In which movie would that be and which character would you play?

A Bronx tale. My favourite movie. I’d be Calogero. The movie is about making choices in life. You’re constantly influenced by people or situations and the main question is: ‘are you going with it or do you let things go?’

What about your future plans?

Just work hard and enjoy the ride. Eventually I want to build a house in Brazil and migrate.

'The saddest thing in life is wasted talent. And the choices you make, will shape your life forever.'

Everything just seems beautiful; the weather, the women, the language and the music.

What keeps you going while chasing your dream?

You get out what you put in.

On the 18th of December WOEI is releasing the “This Thing of Ours’ capsule.

To celebrate this in-store launch WOEI teamed up with upcoming Dutch illustrator STIKSTOK to make a limited edition custom made card deck along with a tee and a free mixtape. The collaboration between WOEI & STIKSTOK is inspired by the classic Martin Scorsese cult movie ‘Goodfellas’.

Brave People is a creative agency in Tampa, Florida that provides branding, interactive and production services to its clients. We had a nice talk to Gabe Lopez about the creative proces and …

It’s needless to say that we’ve been heavily looking forward to that Friday night on which Kutmah would perform in Rotterdam. Kutmah had already earned himself a steady position in our top three all time favorite DJs, and his performance turned out to be one of the best nights of 2013 in jazz venue Bird. …

Joris Debeij is a Dutch director who lives and works in LA. On his blog I am Los Angeles he tells the story of inspiring Angelenos. We talked to him about his work, future plans and Los Angeles …